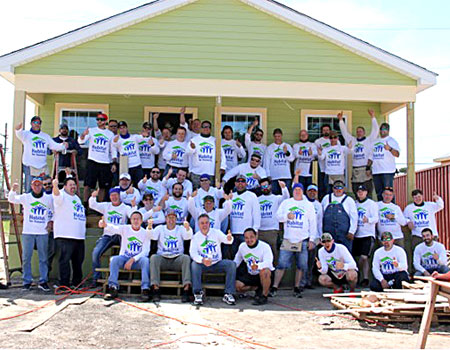 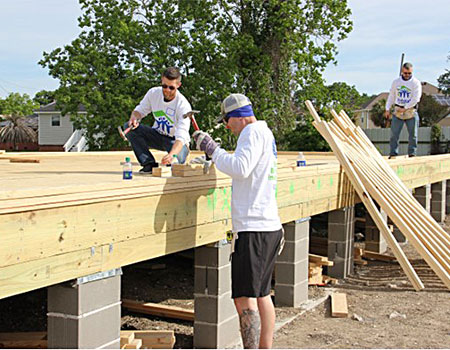 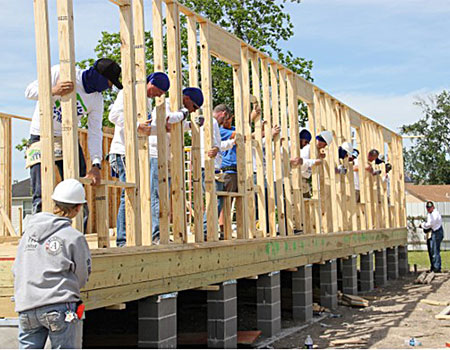 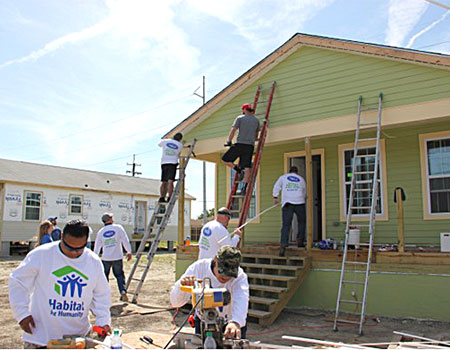 While in New Orleans for training, Tingue employees help Habitat for Humanity

NEW ORLEANS — For most, 1,100 square feet might not seem like much, but to those who have little to nothing, it could mean everything. We all remember the chaos and destruction wrought by infamous Hurricane Katrina in 2005.

However, none remember so well as the millions that were directly affected by the storm. Forced to evacuate, New Orleanians returned to such devastation that there was nothing to do other than start over. But how do you start over when you have nothing to start with?

As the Gulf waters receded, a new and welcome flood of relief efforts began streaming into the area. Individuals, organizations and companies from across the country came together to lend aid. Known for their construction of decent and affordable housing, Habitat for Humanity has been actively involved in the rebuilding efforts along the Gulf Coast.

Together with the volunteered labor of people from all walks of life, they have built more than 6,000 houses in that area since the storm, more than 600 in the city of New Orleans. Several programs are available for those who want to get involved, whether it’s a renovation or a build from the foundation up.

One company that recently sought involvement was Tingue, a family-owned and -operated organization in the commercial laundry industry. In April, Tingue took the opportunity to reach out to the New Orleans Area Habitat for Humanity (NOAHH) and lend a hand while they were in the city for a training seminar.

About 50 Tingue employees from the sales division, along with CEO David Tingue and company president Ty Acton, spent a day working in small groups on two Habitat homes.

Stepping away from their normal routine of sales and installation, each group was given an assignment and guided through its completion with a Habitat member on site, making thorough checks to ensure quality and safety standards were met. Regardless of the construction experience of each individual, every hand had work to do. The Tingue team helped with various phases of the build, from painting and sanding to, quite literally, putting up walls.

“We wanted to help in our own small way, be a part of providing homes for the less fortunate,” says Acton. “The event was so incredibly rewarding for our team, and the Habitat community was gracious and extremely appreciative to have the help.”

NOAHH members found a task for every volunteer, giving them the chance to learn new skills and bond as coworkers on a new level, all while donating time and energy to those in need.

Future homeowners are also involved in the builds, as they are required to contribute a certain number of hours in work, on not only their homes, but on those of other future Habitat homeowners as well.

Before putting in the hours, or “sweat equity,” a future homeowner must first meet certain criteria to be eligible to enter the program. They must have a genuine need for Habitat housing, have the ability to pay a monthly mortgage, have at least two years of stable income, undergo a credit check, and show willingness to partner with Habitat for Humanity in construction and also classes that will prepare them for homeownership. All these things combined give them their best chance for success and guarantee that the time and energy of everyone involved is well spent.

Volunteers can be confident that their hard work will be around for the future generations of the families they are helping. Habitat for Humanity strives to build homes that will withstand time and the elements.

For instance, NOAHH homes are built in accordance with the same building codes used in Florida, one of the strictest in the nation. Stronger fasteners to hold on roofs, elevated foundations to help protect against flooding, and hurricane kits that include pre-measured boards for covering windows, complete with pre-drilled holes for easy placement and removal, are just a few of the preventative measures utilized.

Local resources are used in the construction of NOAHH houses, helping to ensure that the homeowners will be able to acquire the same materials in the future for maintenance and renovations while simultaneously promoting the growth and survival of the local economy.

Tingue found that volunteering for NOAHH was the perfect way to give back to a community that they visit so often. They gained more than just the satisfaction that comes from giving. The experience was an invaluable and unique team building opportunity.

New and seasoned employees, sales reps and CEO alike had the opportunity to work alongside each other, converting their work ethic and communication skills from the office to a building site. Truly, the benefits extend to more than just the families that will be making these houses into homes.

“After doing this event, I believe more companies in our industry may want to get involved and give back to a community in need,” says Acton.

The Tingue team would like to encourage other organizations, in and out of the commercial laundries industry, to reach out to their local Habitat for Humanity for a chance to build opportunities within their communities and their companies.

More information can be found by visiting www.habitat.org or by calling 1-800-HABITAT.

Jennifer Bussey is a freelance writer from Georgia.