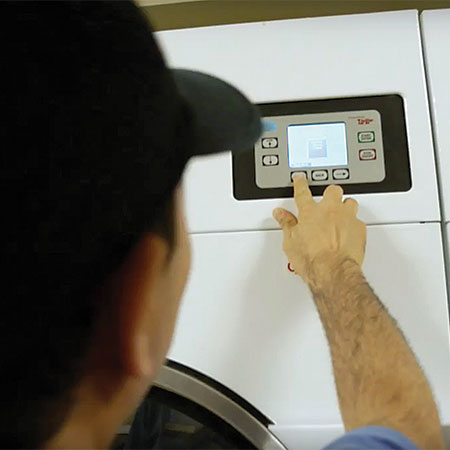 RIPON, Wis. — We just can’t ever get away from lint. In the on-premises laundry (OPL) environment, staff, if they are doing their job, are emptying lint compartments frequently, sometimes throughout the day. And when we leave for the day and run loads through our dryers at home, we are cleaning lint out of the filter regularly.

Most of us have at least a few times mused when emptying a lint compartment, “Where does all this lint even come from?” But the truth is, we know where it comes from.

All those towels, sheets and pillowcases are emerging from the tumble dryer just a little bit lighter.

While normal usage provides its fair share of wear and tear on linens, just by washing and drying them, we are contributing to their degradation. And thus, the source of that pile of lint you are cleaning from the tumble dryer’s lint compartment.

So, we know that pile of lint in your tumble dryer isn’t just accumulating out of thin air; it’s the evidence of the slow loss of fibers from linens. There’s not much we can do about the loss of fiber, but we can definitely slow it down significantly and, in the process, gain a longer life span for linens—meaning less lint.

Reduced linen degradation and less lint in your laundry starts with drying loads to a set moisture level and no further. Even our in-house laundry experts were surprised at just how much overdrying contributes to linen degradation. In developing our moisture-sensing technology for tumble dryers, lab engineers took a keen interest in lint and learned there was far more of that annoying stuff building up when loads continued to tumble in the dryer even after they were dry.

What was learned is that even just eight minutes of overdrying of loads contributed to 31% more fiber loss. In short, the more that loads are overdried, the more fibers are lost, the more lint is created, and the shorter the life span of linens becomes.

The simple answer to reducing the overdrying condition and excess lint (and the additional expenses in wasted labor and utilities that come with it) is to upgrade laundry equipment with moisture-sensing technology that dries to a pre-set level and stops the drying process.

If an equipment upgrade isn’t an option, it comes down to a mix of utilizing the programming capabilities of the tumble dryer, along with additional staff training time. Emphasis must be on eliminating judgment calls and the common occurrence of staff adding dry time to go have a break.

Many managers have also noted that staff often makes the decision to dry to the maximum time possible to ensure when they come back, the load is dry. From the data shared, we now know such decisions have costly consequences that also create lint.

STAY UP ON CLEANING AND MAINTENANCE

Like it or not, no matter what, lint is always going to be an annoying part of the laundry room operation. However, knowing that not staying up on cleaning it out will negatively impact efficiency, and even can be dangerous, is enough motivation to make maintenance a priority.

Tumble dryers with self-cleaning lint filters reduce the lint maintenance significantly and should be preferred by laundry managers. These units need only have the lint compartment emptied at the end of each day, saving valuable staff time.

With the compartment door open, also brush the edges of the self-cleaning filter to gather any excess. If air is traveling evenly through the filter, lint should collect across it, not just on certain sides or areas. It is not necessary to remove and clean the screen each day; follow the recommended maintenance schedule from the manufacturer.

Lint drawers will require more work and should be emptied after at least every couple loads. Managers need to make sure staff is aware of the need to empty these drawers frequently throughout the day, or efficiency will suffer. Because they are not self-cleaning, these screens will continue to collect lint and restrict airflow.

Ducts are another area that will require periodic maintenance. Your laundry equipment distributor service personnel can assist with checking the back pressure of the unit. Back pressure is tested with the tumble dryer in operation. Adequate back pressure (according to manufacturer’s specifications) ensures lint remains airborne. As we know, if it isn’t being forced out, it is collecting on flat surfaces. If it’s collecting, that means your laundry may need to schedule more frequent cleaning of ductwork.

The bottom line on tumble dryers is that they are a circuit—they take in air, heat it, send it into the cylinder and exhaust it on the other side. Lint can come into play anywhere in that circle. So, if you or your staff notice loads are not emerging dry, or you need to add extra dry time you didn’t need before, lint is the likely culprit. Somewhere along the line, intake or exhaust air is being blocked.

Monthly inspections and cleaning of ductwork is never a bad idea to keep the operation at peak efficiency. Remove lint from inside the exhaust duct as well to prevent any overheating issues. It’s also a good idea to vacuum air vents and drive motors quarterly.

We know lint doesn’t just come out of thin air. These are fibers shaken loose from linens during the laundering process. The front line for reducing just how much linen degradation occurs in our facilities starts with limiting the amount of time linens spend in the tumble dryer—halting over-drying. Our options are to either rely on moisture-sensing technology to dry to a preset level, or, in the absence of this feature, dial-in prescribed dry times and train staff on the importance of adhering to the specific programs.

Like it or not, however, lint always will be part of our world, even if we reduce overdrying in our operations. But this is again where training and processes come into play. Staff must be grounded in the expectation for lint removal. As mentioned, that responsibility is less of a time drain with self-cleaning lint compartments that need only be emptied at the end of each day.

Maintenance is paramount to not only ensuring the efficiency of the tumble dryers in the laundry room, but also overall safety, as excess lint can accumulate in vents and on components, motors, etc. Employ strong processes, keep employees accountable for maintenance, and schedule periodic checks to make sure lint is being held at bay in the laundry.

If your laundry is seeing accumulations of lint in other areas of the laundry, it’s a sign of improper airflow—air back pressure being higher in the exhaust—and you should have a distributor service technician review the system and correct the problem.

Bill Brooks is the national sales manager for UniMac, a provider of on-premises laundry equipment. He can be reached at [email protected] or 920-748-4437.