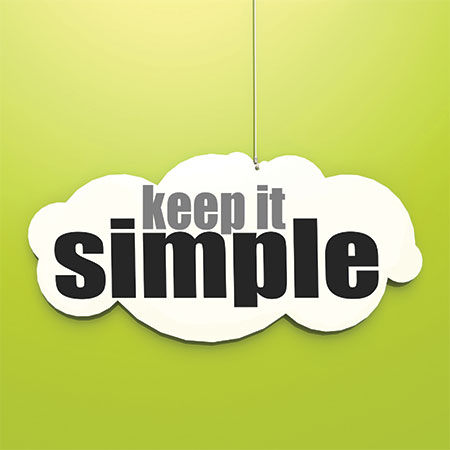 When it comes to rewash, simple measures rule the day, author writes

BATESVILLE, Ark. —  Laundry can be as simple or as complicated as you want to make it. As a newcomer to the industry six years ago, the laundry I inherited was, quite honestly, the latter. So, when I had the opportunity to redesign the operation from the ground up, my focus was on keeping it simple. This is possible, and don’t let anybody tell you different.

We are a hospital laundry processing 1.5 million pounds annually. Our standards are high, and we managed to keep our operation simple.

What I liked about the laundry was the manufacturing pace. The flow varies little from day to day, making it easy to take a manufacturing approach to the task. Doing so not only streamlines the department, but also requires a heavy emphasis on process.

So that’s what we did. Starting with a blank canvas, we updated equipment to higher-featured UniMac models and took a hard look at the processes staff was working with.

One of the main areas where we needed simplification was in the chemical realm. We were constantly having to adjust dosages, and going through a ton of chemicals. It was far too complicated. I set about to simplify it and put emphasis on reducing the growing volumes of rewash. Let’s face it, rewash is a killer for any laundry room.

As I mentioned at the onset, the laundry I inherited was complicated. We had six buckets of chemicals, and it seemed the chemical rep was a constant figure in our laundry, trying to adapt formulas and programming. My first step in retooling my laundry and seeking to reduce rewash numbers was looking at the other options available.

The result was simple. We went from six buckets to three, with one basically carrying the weight of the majority of wash cycles. Simple meant reducing the number of variables. Nothing complicated there, and yet the move delivered far more consistent results.

Next, we began separating linens by item and soil level—that’s roughly 14 types. Again, I don’t think this is a groundbreaking piece of processing. However, I do think it’s a commonly overlooked method for having a significant impact on rewash percentages.

It’s really about staff awareness of the condition of linens that come in. The quicker you can catch significant stains, the easier it is to deal with them head-on, versus rewash. While actions such as clean linen dropping on the floor can’t be prevented and will produce rewash, much of the volume of rewash can be reduced. It’s about knowing the actions and factors that impact that percentage.

Once the washer-extractor door is closed, there is no guarantee of quality. Again, educating staff on standards and warning signs of an issue can head off bigger problems and bigger rewash volumes.

It may seem basic, but I encourage staff to use the smell test. If loads emerging from the washer-extractor don’t have that fresh smell, it’s an opportunity to investigate further or bring it to my attention. That’s when we look at what may be impacting quality and, as a result, our rewash.

Perhaps the chemical dosing is an issue. In our laundry, we set a baseline for chemical usage and mark the bucket each day. At the end of the day (or before we start the next morning), we measure the level to make sure the proper amount is being added. This small, simple action can head off any issues before they become larger problems, which in a hospital environment can be quite immediate.

Bottom line here is empowering staff to ask questions and stay alert to any red flags.

What is the root of rewash? Stubborn stains, etc., that make it through a wash cycle but aren’t clean enough to make it back to the floor. While there will always be random stains that are difficult to manage, often a controlled environment like ours will see volumes of the same stain. This is where preventing rewash involves a little bit of detective work.

In one example, we continued to battle a tough stain on a regular basis. Our normal wash cycle was not completely removing it. Up to the floor I went.

With a little bit of digging, we identified the stain as betadine, an antiseptic used before procedures. Knowing the type of stain we were dealing with, we now could design a pre-treatment strategy and a wash cycle that would lift the stain—no more rewash issue or linen loss.

Another example involved linens coming in completely trashed, heavily stained and with shoe prints on them—beyond the norm. These were tough stains that were contributing to increasing rewash and pieces being ragged out. Investigation here uncovered that ambulance crews were using them to wipe down the floors in their rigs after a call.

The fix was simple. We added blue towels to our stock for this specific purpose. The blue stands out, and we know these are wipe-down rags that do not have to be stain-free like other linens.

KEEP IT SIMPLE, THINK OUTSIDE THE BOX

Simple has been the operative word for our operation, and it has delivered results. It even extends into our chemicals and formulas. We are not aggressive in our rewash. Simple rewash includes scoops of Arm & Hammer detergent at 160 F for 20 minutes and the use of chlorine bleach (chlorine is the final step—peroxide bleach has been highly effective for our heavy soils).

I would venture to say that not many on-premises laundries are using this simple formula. But we took an out-side-the-box approach from the start, and it has worked well. At present, our rewash is only 1%; comparatively, the national average is 3-5%.

Another outside-the-box idea: Get other staff involved. Linens with tape on them can be a challenge in a medical laundry. Again, if it’s not discovered, it will contribute to rewash. Removal of the residue is challenging and involves scrubbing. Complete removal is often not possible. So, after a few washes, the tape residue picks up fibers, becomes visible and not usable.

Knowing this, we collected the tape we found and shared it with nursing staff, citing that this reflects “X” amount of linens that were ragged out. Raising awareness didn’t completely eliminate the issue, but it did help reduce the practice. The point is that when other departments are made aware of how their actions impact other areas (and the facility’s bottom line), it’s generally well received and people take corrective action.

Want to reduce re-wash? Stop overthinking it and deploy a few simple process changes. They will have an impact. Empower staff to be more than just task masters. Ask them to be partners in quality. Do the same with others in your facility. Rewash and actions that reduce the lifespan of linens have an impact. Help them understand their role in the process, while asking them to be partners in quality.

From there, it’s a matter of adjusting the wash process and its four simple elements—time, temperature, chemical action and mechanical action. Never underestimate simple stain removal practices or reducing the amount of chemicals going into the wash cylinder.

Remember, we are a hospital laundry serving a 160-bed facility and various satellite locations, and our base chemicals are a standard detergent, bleach and softener. For heavy soils, we are still employing just a standard off-the-shelf detergent, chlorine bleach and several spotting agents. Simple.

Our rewash is at 1%, but by no means are we satisfied. We can do better. Challenge your staff in the same way to develop and adhere to simple process changes to reduce rewash. You will be amazed at the results.

George Latus is manager of laundry services at White River Health System, Batesville, Ark. He is a Registered Laundry and Linen Director (RLLD) certified by the Association for Linen Management. He can be reached at [email protected]