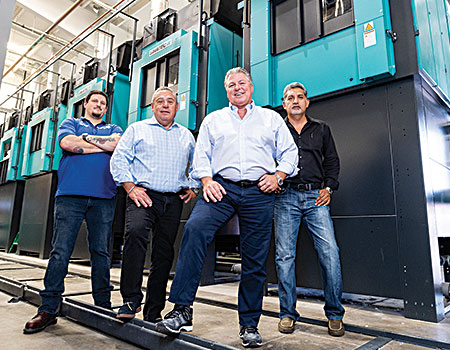 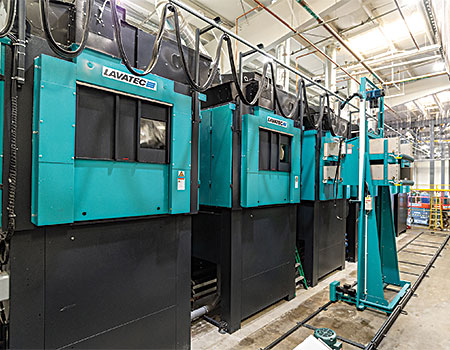 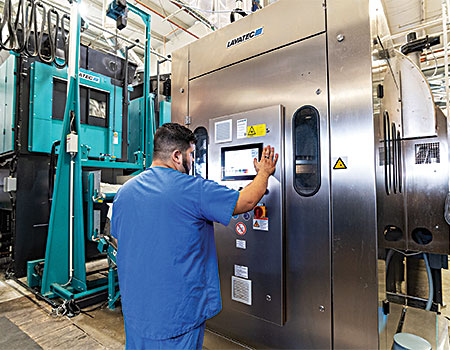 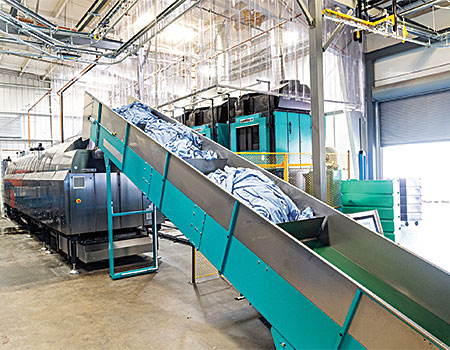 Not far away on another campus in Turlock, Calif., this saying applies to Campus Laundry’s healthcare laundry services. Providing laundry and linen services to more than 30 major hospitals, clinics and other medical facilities mostly in the Bay area, the recent installation of a full array of Lavatec equipment is helping them make big things happen.

The new equipment was the end-all to a $3 million expansion program after Campus Laundry signed a new contract with a locally based large healthcare group. The deal added 11 million pounds of new, finished goods, raising annual volume to 40 million pounds produced in Turlock.

NO SUBSTITUTE FOR ‘IN-GAME’ LAUNDRY EXPERIENCE

Performing on the big stage requires attention to the little details. Campus Laundry faces an array of laundry and linen issues that impact patient health, safety, security and sustainability while servicing healthcare facilities from the Bay area to Fresno. The Turlock location, which opened in 2013 and employs 135 people, operates 16 hours a day, seven days a week and 365 days a year, with 24-hour turnaround.

It helps that the management core of Luckenbach, VP of Operations Murray Smith and Operations Manager Miguel Gutierrez, have seen it all in the laundry business.

With a combined 90 years of experience, they’ve worked with many different systems over time, both good and bad. They understand the intricacies of all the various makes and models, from tunnel compartment construction techniques and press diaphragm designs to tunnel drive technologies and dryer efficiencies.

“I worked with Lavatec equipment early in my career,” recalls Smith, a 38-year industry veteran, about his good experiences in the 1980s. “They were great machines, simple to operate and maintain. But after seeing their latest models, they’ve raised the bar even higher. When we were looking for new equipment, we wanted a workhorse. We have it now.”

Some of the other tunnel washers at Campus Laundry are chain-driven, which often need time-consuming regular maintenance, lubrication and service of drive components, sprockets, gears and other parts. Gutierrez noted the advantages of chainless drive motors in the new tunnel washer, and how they are less expensive to run over the life of the equipment.

“We don’t want to buy inventory and spend a lot of money to keep them running,” he says

Adding that it could mean decades of operation, Luckenbach talked about the decision to go with the manufacturer.

“We evaluated all the other brands, but in the end, we liked what we saw with the Lavatec system,” says Luckenbach, who has been at the helm since August 2017 and in the industry since 1982. “It perfectly matched our requirements for processing healthcare linen and achieving our productivity goals. Plus, we had to meet a really tight timeframe and Lavatec could deliver to hit the deadline with our new customer.”

“It was really a total team effort to bring this all together,” explains Keith Ware, VP of sales for Lavatec Laundry Technology Inc. “There were not a lot of difficult issues up front. We worked with our engineering teams at our factory in Germany to configure their designs, and then we worked closely with Bob Corfield on the commissioning process.”

So Lavatec worked with another partner in the United States to have a shorter transfer conveyor custom-made, which fit the layout better and avoided delays. A full Lavatec engineering services team arrived in Turlock not long after and the commissioning process took two weeks to complete.

“The installation was quick. It was a pretty seamless transition to fire it up,” recalls Gutierrez, who has served as operations manager since 2013.

With all the equipment up and running, Campus Laundry could now put it to work and meet the stringent requirements of its new healthcare clients. This required programming the new controls for tailored individual loads and managing different formulations of chemicals to treat a variety of soiled goods.

Smith said the team approves of the new and enhanced operating controls package that is easy to program.

“We appreciate the ease of use of the new operating system,” he says. “It is simple and user-friendly, and it has remote diagnostic support. It’s awesome and not complicated.”

WATER/ENERGY EFFICIENT, EVEN BY CALIFORNIA STANDARDS

In the Golden State, many healthcare organizations require their service providers to meet stringent standards for resource efficiency. The Campus Laundry team agrees the new tunnel washers and dryers use less water and electricity than their other equipment. Luckenbach says this will help them meet rising customer demands.

“We base all our production numbers on reality, so we run our tunnel washers at very low water consumption,” he shares. “The results have been great and the quality has been excellent.”

“Lavatec matches up well to our business,” he adds. “And it’s absolutely something that will help us attract new business in the future.”