CHICAGO — Linen rental is advantageous for both laundry services and their customers.

Healthcare providers have been moving toward rental for some time while hospitality customers still like the branding options of owning the goods. But how has the pandemic affected customers’ attitudes toward customer-owned goods (COG) and rental? And what does it mean for laundry operations?

American Laundry News reached out to the Healthcare Linen Alliance (HLA), the American Reusable Textile Association (ARTA), the Association for Linen Management (ALM), and TRSA, the association for linen, uniform and facility services, to find out what their laundry and linen service members are experiencing regarding COG vs. rental.

On the food and beverage/hospitality side of the industry, Ken Koepper, director of member and industry relations for TRSA, says that its F&B/Hospitality Committee has identified shifting hotel work from COG to rental as a priority.

Dan French, vice president and general manager of TRSA member Gold Coast Linen Services in West Palm Beach, Florida, which provides a mix of food and beverage/hospitality and healthcare textiles, tells Koepper that COG wash is a complicated process that demands as much or more attention to tracking and historical detail than washing rental goods.

“COG garments need to be segregated on first arrival,” he says. “They need to be tagged, chipped and entered into route accounting systems. These processes are best done on the clean side so coordinated pickup and preparation is best. Once chipped and tagged, COG items will sort and deliver through normal processes.”

French points out that not all garments are suitable for COG washing—many can’t tolerate the industrial laundry wash process.

“Replacing worn garments is the customer’s responsibility,” he says. “Communication needs to be flawless. Pricing is critical. COG must be priced higher. There is no under wash in COG. You need to build it into your pricing models.”

Koepper shares that TRSA member People’s Linen Service of Keene, New Hampshire, has 90% of its hotel volume in rental as opposed to COG. The company’s rental success is the antithesis of the vast majority of TRSA members who specialize in this market.

Mike Benik, People’s Linen CFO, indicates to Koepper that when both hoteliers and linen services back off their traditional stances, even if just a bit at first, rental can prevail because both parties are better served.

For example, in a “hybrid” program, the linen service buys the branded linen the hotel wants and rents it to this customer. Contract terms indicate that should the partnership end before the service agreement expires, the hotel will buy the linens from the service.

“It’s not the most desirable for us, but we still control the amount of inventory and the amount purchased, they get their brand, and we still rent it to them,” Benik says.

This doesn’t have to apply to all items the hotel uses. A customer may like the complete range of rental items except a particular a top sheet, for example, so People’s will buy it and charge a premium for its rental.

Either party may retreat completely from its industry’s traditional stance. A hotel in a chain operation whose properties typically adhere to its linen brand standard can break ranks, choosing to benefit from rental’s lower cost. People’s may be attracted to a COG deal with a larger resort (at least 150 to 200 rooms) because it represents enough revenue for the laundry.

“We try to tell them why COG is contentious,” Benik explains.

COG arrangements, more often than rental, are vulnerable to linen shortfalls. Supervisors responsible for ensuring rooms are properly made up are likely to have difficulty prompting their management to spend enough to maintain proper inventory.

People’s makes it clear to COG customers they will not receive seven-day-a-week service. Special weekend runs may be needed, prompted by an unexpected rise in demand from a hotel or a production snafu in the laundry. But a request for seven-day service is similar to asking an outsourced laundry to prematurely wear linen out from too much laundering.

Again there’s potential for compromise. The service agreement can provide for the substitution of rental linen when a COG shortfall is expected. People’s has luxury, mid-scale and economy linen lines.

“Our stock can match their brand,” Benik says. When this occurs often enough, customers can become accustomed to rental linen and shift to all-rental.

“They realize they don’t have to manage the linen purchase anymore and they convert.”

Another way to prompt selection of rental over COG is to compare the durability and comfort of rental linen to the brands customers think they want. Such prospects who believe they have found items that will distinguish them are likely to be short-lived.

When People’s evaluated samples of one hotel’s planned buy, they appeared attractive, but would likely stiffen and have only half the life of an equivalent rental product. The laundry’s acceptance of such work was a trap—if the linen were used, the customer would almost certainly blame the laundry for causing the problems.

Instead, People’s noted that its rental linen doesn’t suffer from these issues and highlighted the importance to hotels of recognizing that because items are commercially laundered, durability must be considered as well as attractiveness and branding.

Evidence that rental is the better alternative was around before the pandemic, but COVID-19’s impact on labor and supply chains has accentuated the difference. These two issues converge when a hotel doesn’t buy enough linen and requires repeated servicing of the same linen.

The hotel’s merchandise costs increase and so do the linen service’s (especially route labor and fuel, both more expensive post-COVID). Hoteliers ultimately bear these COG service costs, further increasing the pricing edge of rental, which is also less stressful on them.

Hotels’ inability to procure linen due to supply chain difficulties also favors rental. Lately, they are asking linen services for inventory and appreciating the simplicity of delegating purchasing and laundering so they can dedicate whatever labor they can get to make up rooms.

“It’s not common,” Benik says, “but when customers are really busy, they are very happy to get what they can get.”

The same can apply to a single COG item such as a pillowcase. When this occurs, People’s advises them they still need to buy more, but the available rental stock will tie them over.

To maintain rental’s stock-keeping edge, People’s pre-orders inventory and asks suppliers to store it earlier than People’s needs it. While shortages of certain products have been a problem, shipping cost (which has grown dramatically) is more of a concern.

Rental deliveries to hotels are larger, and for a hotel that converts from COG, more storage space is needed because drop-off and pickup are less frequent.

Linen loss becomes more of an issue in rental with the customer’s delegation of inventory control responsibility. When they rent, they pay not to worry about counts. They don’t observe as closely all the places linen can go out of service and may exaggerate losses.

It’s up to the linen service to determine how to cover the cost of anticipated losses; building it into the base charge for service can help avoid arguments, although separate charges can work, too.

While flatwork generally isn’t vulnerable to guest theft, high-quality terry can be.

“It’s a lot less enticing to steal if it’s not a luxury brand,” Benik quips.

Loss can also be caused by multi-unit hotel owners shifting linen inventory from one property to another.

Factors such as these make charging and educating hoteliers crucial. Linen services can pinpoint losses by evaluating each customer’s linen replacement rate and recognizing where deliveries exceed pickups.

“Losses are, without a doubt, manageable,” Benik says. “We get very consumed with linen loss and rightfully so. It’s important.”

But labor remains the highest cost, is far more difficult to control and could do more bottom-line damage.

If a laundry doesn’t have enough staff to complete its luxury linen work for the day, affected rental customers may have to use mid-scale or economy equivalents. These pressure laundry margins but when hotels are very busy, they are less concerned about the consistency of their linen items.

Prospects for converting from COG to rental still can be hesitant, though. After all, if they rent and there’s a sudden falling-out with a linen service, they won’t have any linen.

“There’s some truth to that,” Benik admits. “It’s one of the obstacles you have to get over.”

Service agreement clauses protect them and they grow confident in a laundry that continues to demonstrate trustworthiness.

Despite the details that need to be worked out for conversion, People’s remains bullish on rental and could grow closer to 100%. Processing is so much easier when accounts are commingled, instead of having to track each customer’s goods.

“It’s the best way to service the industry from a lot of different perspectives,” Benik concludes.

Miss Part 1 and a dive into healthcare COG vs. rental? Click HERE to read it! 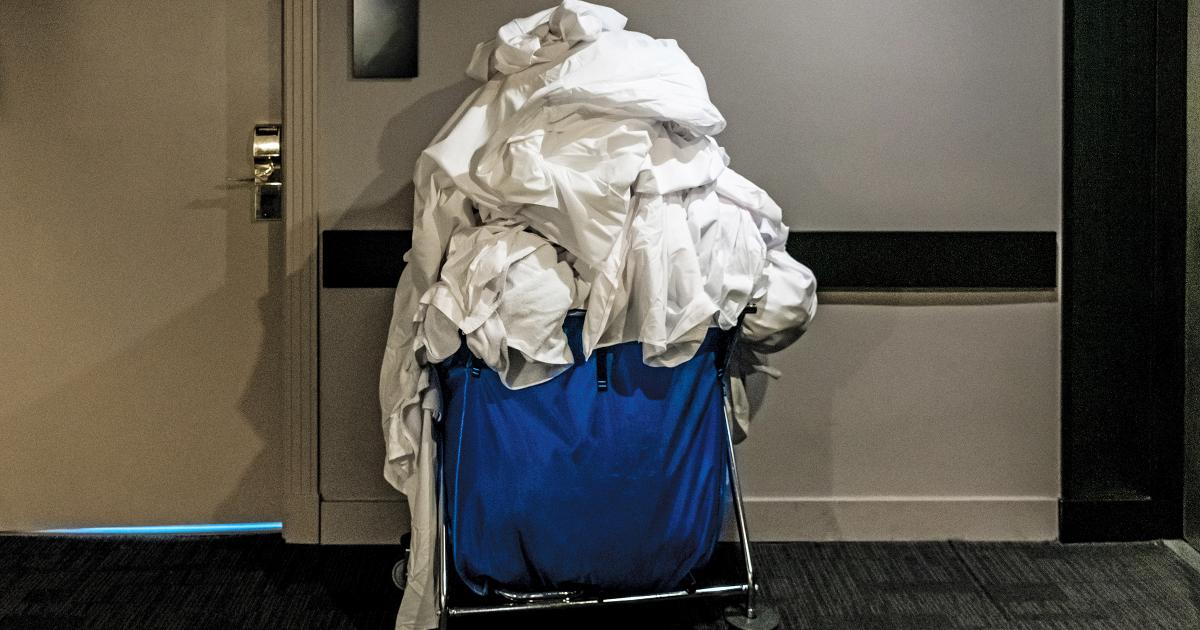