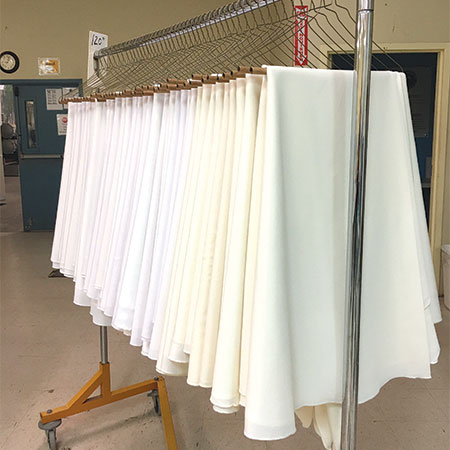 The local company processes goods for the hospitality industry and focuses on table linens and specialty items, says Jared Johnson, its president and CEO.

While today the laundry is a growing commercial operation, the story of its beginnings starts with an entrepreneur’s purchase of a coin laundry after Hurricane Katrina.

And therein lies a tale.

“Bazile has been a serial entrepreneur since he was 19 years old,” says Johnson. “He started several businesses, including restaurants, bars, catering, real estate rentals and an office supply business, to name a few.”

Throughout those early years as he started businesses, Bazile used a coin-op laundry to wash his clothes. In August 2006, after Hurricane Katrina, Bazile decided to buy his own coin laundry, Johnson says.

Bazile saw a golden opportunity in the coin laundry market after Katrina with the influx of contractors and transient workers moving into New Orleans to help rebuild the city.

“Within a few months of starting the coin-op laundry, a friend of his who invested some seed money in the original purchase of the coin laundry asked him to wash some of the table linens from his catering business,” Johnson says. “And that’s how Dirty Laundry Linen Service was born.”

However, as all entrepreneurs know, not everything goes as planned when starting a business—especially when it comes to laundry and linen services.

From the beginning, Johnson says the biggest challenge for the company was not having an ironer to press the linens. It also didn’t have the chemical formulas to remove some of the food stains in the table linens.

“At one point, (Bazile) started subbing out some of the stain removal work to a local dry cleaner to help him remove the food oil stains from the linen,” the CEO says. “Along with the help of his staff, he was able to time the linen in the dryers just right so that they came out looking as best as possible.”

It wasn’t until 2015, the year Johnson partnered with Bazile, that the company moved into a larger commercial laundry facility. Then, the operation was able to provide a top-quality product to its customers and, in turn, have the ability to expand the business to serve larger customers as well, Johnson says.

Dirty Laundry Linen Service has maintained relationships with some of the larger laundries in New Orleans, providing those laundries an option for smaller customers that would not be a good fit for their plant, Johnson says.

He says the smaller customers are often ideal for Dirty Laundry’s facility or its smaller processing facility (a coin-op laundry) in nearby Kenner, La. That facility handles smaller customers, like Airbnbs, state parks, and salon and spa operators.

“If we get a phone call from a large customer that we can’t handle or a customer that is looking for linen rentals, we will direct them to the larger laundries,” Johnson says. “Our hope is to make it a win-win for both parties.”

“Our ironer is powered by two boilers, a 50-horsepower Fulton boiler and a 50-horsepower Bryan boiler,” Johnson says. “We like the peace of mind the two boilers give us, and we alternate running them weekly. We also run a Camus water heater and two Ingersoll Rand air compressors.”

Dirty Laundry Linen Service operates its plant Monday through Friday. Johnson says the washman opens the plant at 4:30 a.m. each day, and the production team arrives at 6:30.

“Currently, we are running a single shift and hope to be running an extended shift or even a full second shift by the end of 2018,” he says.

“Our process begins with picking up from our customers,” he says. “We believe the relationship should be a win-win for both the customer and the vendor, and when a new customer comes on board, they become part of our family.”

Pickup and delivery is handled using a 24-foot box truck, which Johnson says also runs daily on weekdays. Dirty Laundry uses the truck to cover a 150-mile radius from the plant.

“Depending on the customers’ needs, our pickup and delivery process can cover a regular cart exchange to hanging and counting the linens with the customer,” Johnson says. “The linens are transported in 20-bushel, 30-bushel and 39-bushel carts.”

Dirty Laundry Linen Service is a customer-owned goods (COG) operation, he says. So, when linen is picked up, it is tagged with the customer’s name. Once the linen gets to the plant, employees sort it by color, fabric and soil classification. If any pre-spotting is needed, it is done at that time. The linens are then washed and pushed out on the production floor.

After the linens are on hangers, they are bagged and tagged with the size of the linen. If they are still stained after being treated, they will be marked as stained or damaged.

While Dirty Laundry Linen Service got its start after a terrible natural disaster, and experienced the challenges of becoming a commercial endeavor, the company has grown, and is poised to continue this track.

“As we are answering the questions for this article, we are coming off our fourth consecutive record week of sales,” Johnson says. “Our capacity is about 10,000 pounds per day, and we are not at full capacity as of yet.”

He says that the location of the laundry is ideal to serve small-to-medium markets in Louisiana and Mississippi.

“We are hoping to cover as far as western Florida in the coming years,” says Johnson. “We recently added a new business development manager to our team that will be a key component for continued growth.”