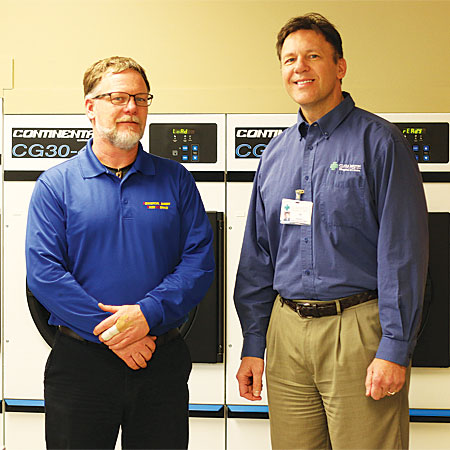 HOISINGTON, Kan. — After outsourcing hospital laundry since 1950, Clara Barton Hospital, located here, brought laundry processing in-house for a $350,000 drop in annual costs, according to the hospital.

“I knew we were getting gouged, but I had no idea by how much,” says Clara Barton Hospital CEO Jim Blackwell. “The results were beyond my wildest dreams.”

Blackwell, who says he was frustrated by the linen service’s cost and quality, studied the laundry process for several years before diving in.

“We just didn’t have any square footage internally to take it in-house without adding bricks and mortar,” he says.

In 2013, that changed. Clara Barton Hospital added a new physical therapy wing, and with the expanded square footage, added an on-premises laundry (OPL). Blackwell says he worked in concert on the project with the hospital’s architect and Brian Asher of Commercial Laundry Sales & Service (CLS&S) in Wichita, Kan.

“The hospital had been paying a linen company in the neighborhood of $3 per pound,” says Asher. “We forecasted that by bringing the laundry in-house, their cost of doing laundry would drop to 55 cents per pound, which included the cost of labor, utilities, equipment, financing, linen replacement and chemicals.”

Asher says he installed Continental soft-mount washers and dryers to ensure low utilities, maximized throughput, advanced programmability and ease of use. The hospital says one laundry operator uses the equipment to process 11,000 pounds of laundry per month.

The soft-mount E-Series Washers (one 55-, one 30- and one 20-pound-capacity model) are freestanding, feature a flexible control and generate high-extract speeds up to 387 G-force, Asher says. Three Continental Pro-Series II Dryers (two 35- and one 55-pound-capacity models) round out the equipment mix.

“We could have poured a thicker concrete pad to accommodate hard-mount washers, but it made sense to go with the soft-mount washers for ease of installation, higher G-force extract speeds, and maximized productivity, efficiency and labor savings,” he says.

According to Asher, soft-mount washers remove considerably more moisture from laundry during extract, so laundry dries in significantly less time.

When developing the on-premises laundry, adhering to state and federal health standards was paramount.

“We ensured there was no cross-contamination,” says Blackwell. “Soiled laundry coming in is completely separate from clean laundry going out.”

Other requirements included a 25-minute bath time at 165 F.

“An optional temperature boost on the washers allows them to reach state and federal sanitation standards,” says Asher. “Because of the 25-minute bath time, wash cycles are close to 50 minutes.”

He says that thanks to the high-speed extract and soft-mount washers, laundry loads dry quickly.

Chemicals are automatically injected into the wash cycle, at the right time and water temperature, according to the program selected. Asher, who also provides the hospital with cleaning chemicals, set up individual wash programs for items like blankets, gowns, sheets, towels, bed pads, scrubs and rags.

Once washed, items are dried in programmable Pro-Series II Dryers. The dryers are engineered with a moisture-sensing system that ensures items are not over-dried, according to Blackwell.

Linen Life Extension (LLE) offers 12 programmable dryness levels and targets any dryness level up to 40%. When the load has reached its pre-set target level of dryness, the control shuts the dryer off. Thanks to this moisture-sensing system, dry goods experience less damage and fiber loss, according to Asher.

“Before we moved laundry in-house, we were getting linens back tattered and stained,” says Blackwell. Now, anything subpar is pulled and replaced with new inventory. “We feel like our wash cycles and attention to detail fit hand-in-hand really well.”

The icing on the cake? Clara Barton Hospital is on track to save $1.75 million over five years.

“The cost savings is impressive, but I’m equally ecstatic about the quality of the product and inventory we have on hand,” says Blackwell. “I can’t imagine why any facility would outsource its laundry.”