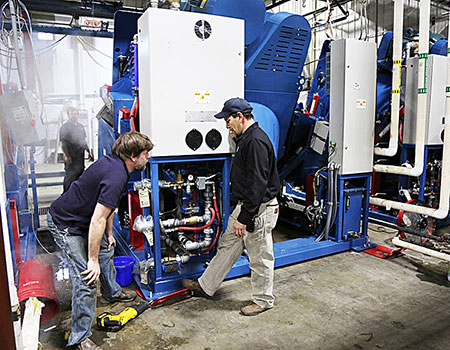 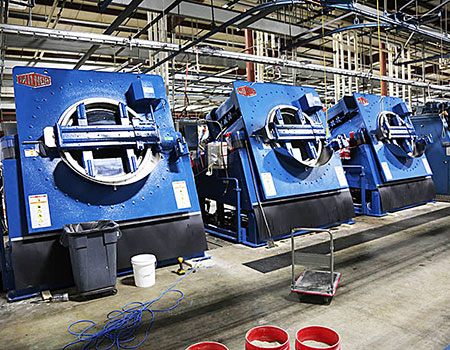 The installation took place over a four-day weekend in November and another in December.

“We have had significant growth in the past couple of years, and we expect that trend to continue,” says Colin Wetlaufer, vice president and general manager of CITY. “We knew we needed larger-capacity washers, and you can’t install larger washers without having equally large dryers.”

Milnor worked alongside CITY’s Maintenance Engineer Jamie Randall to work out the specifics of each piece of equipment.

According to Pellerin, the new equipment will increase CITY’s processing capacity while lowering its carbon footprint by increasing the airflow, drying each load more effectively in less time and using less energy overall.

“As our volume increases, we don’t just want to be able to process the garments, but we want our plant to be as efficient as possible,” Wetlaufer says.

He also says that everyone at the plant had to alter their schedules to make the installation work.

“Production had to come in at odd hours and our entire service department had to change their workweek, but we have a great team and everyone knew what needed to be done,” says Wetlaufer.

Overall, he says, the installation on both projects went as well as possible.

“We are already seeing the benefits,” Wetlaufer says. “The new equipment has already paid off based on a quality and speed standpoint. It was the right move at the right time.”