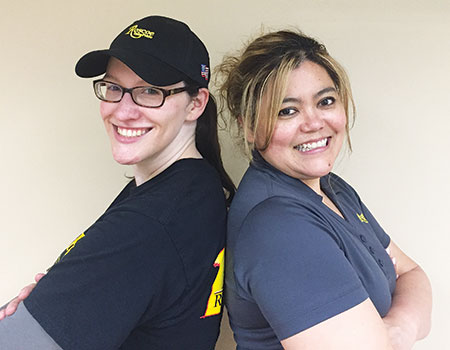 American Laundry News recently had a chance to sit down and talk with two members of different generations of laundry employees at Roscoe Co. in Chicago to gain insight into their unique perspectives.

Miriam Avila is Roscoe’s operations team leader who has been with the company for 23 years in production and supervisor roles. Julia Buik, while being a fourth-generation family member active in the business (daughter of third-generation owner Jim Buik), has less than two years of full-time experience with the company as a business analyst.

Q: Let’s start with each of you telling a little about yourself, how you got into the business.

Julia: I only started at Roscoe a year ago last fall (2016). I was part-time at first during October and most of November, and I started full-time after Thanksgiving of 2016. I’ve only be officially full-time on the job about a year and four months.

Of course, I did intern some many years during high school and at different times during college, but I did go work somewhere else for four or five years before I joined the business.

Q: So, what are you doing now? What is your position?

Julia: I am business analyst, so what I’ve been doing is a lot of the analysis of different reports. I’m learning a lot of our IT software and our different databases and how they interact with each other and how we use those databases to pull metrics, to measure our customer satisfaction.

A lot of what my work entails here is the team leaders asking me to provide them with different information for their departments, mainly the service department, but sometimes the production department, and making sure to provide those teams with information and data they can use to make their teams stronger.

Q: Miriam, what’s your story? How did you get into the industry?

Miriam: I don’t know. I’m still trying to figure that out. (Laughter.)

Miriam: So, not too long after high school, it was one of those things where I wasn’t sure where I was going, what I was going to be doing with my life, so I’ll just get a real job for a “minute” here, and then I’ll figure what I actually want to do. I guess I still haven’t figured that out because I’m still here. (Laughter.) It’s taken me 23 years.

Julia: Maybe this is your real job?

Miriam: You’re absolutely right. Originally, I started in production, worked on the floor as a scanner operator and sorting garments. At the time, we didn’t have a fancy garment-sorting system, (it was) manually sorting. Then, kind of worked my way up.

Julia: You were the first operator of the sorting system.

Miriam: That’s right. I was here when they purchased what was a state-of-the-art sorting system—in 1997. I was part of that process and that project.

Around that time, the floor supervisor was starting to plan her retirement. As I had been growing with the company, learning new jobs, at the time they had a skill check certification. I was the first one in the nation to be skill check-certified at level one, and then they decided to go a higher level, which required us taking additional tests, CPR, basic math and other extra stuff. So, I did that, mastered my job, and other jobs, throughout the whole process.

It was also at the same time the company was working on being ISO-certified. There was a lot of training and a lot happening with the company. Somehow, I was being pulled into different areas, whether it was for training or new equipment and, again, my supervisor was looking to retire. It wasn’t necessarily very structured back then, and I was loving it. They were just giving me this and then this, and the next thing I know, I’m getting a certificate, skill check level two.

By then, I had learned so much from my supervisor just on how to run the operations on garment sorting. Then it became more structured. They started investing in me, sending me to classes, workshops.

Julia: Which ones did you go to early on?

Miriam: It was a lot of online training seminars, workshops they were doing. Anything you could possibly imagine, I was the first one to be asked, and I was loving it.

It came to the point we were ISO-certified and we needed to train other operators. It was very easy for me to work with my co-workers because we were just co-workers not too long ago. There wasn’t any, “You were just my co-worker before,” none of that.

Julia: It was teamwork, important to the culture.

Miriam: It was teamwork. Yes, I was growing within the company, but I was able to relate and bring them up to a higher level. And that’s how I became a floor supervisor. But the plant manager kept giving me more responsibilities, letting me handle certain things. It was done in such a good way that it never felt like, “Here’s a bunch of responsibilities.”

Miriam: No, I got to the point where I was pulling more and taking more. That’s how I grew within the company, and then the plant manager retired, and I took that position. Some other structures have happened over the years, and I’m now the operations team leader.

Q: You’ve already talked a little about advances in technology, Miriam. What has been your experience, overall, with advancements in the industry?

Miriam: It makes my job a lot easier. I love it. I’m all for it.

In our industry, sometimes it’s a little bit challenging when it comes to operators on the floor. There used to be operators who were literally afraid to turn on a computer and log in and put your name, (but) all you have to do is put your name. They would look at a keyboard or a mouse, and they would be very concerned: “I thought this was a laundry. I thought all I was going to do was hang stuff. You want me to touch a computer and do something with it?”

I do see that with some of the older employees, because they don’t feel that they’re out there when it comes to technology. You have to do the proper training in small chunks. Once they accept it and are comfortable with it, they’re perfectly fine. I wouldn’t go to an employee who’s been here 20 years and say, “Here’s the new sorting system—click here, click here, log in, here’s your job,” and walk away, like you can do with a younger person, who is just on it.

You have to be able to operate and train with different mentalities in mind because people, like Julia, three steps, here’s what I want done, and she runs with it. It would take me an hour with somebody else to break it down to their level so they can be comfortable and they can run with it.

Julia: Your skill is recognizing what training they need.

Check back Thursday for part 2, continuing on technology and looking at automation.