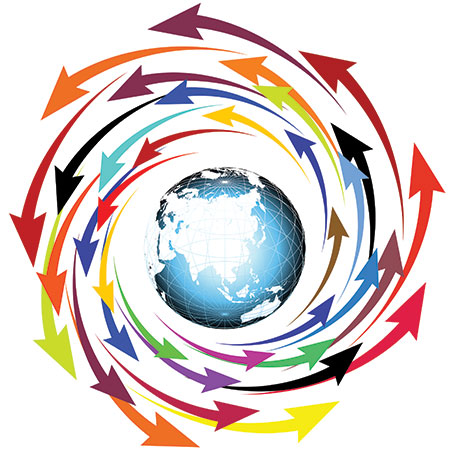 “The interesting factor is that we’ve actually consumed, as a world, 24 million tons in ’15-’16, which was 3 million more than we produced, a million more the following year and then anticipated a million more the next year,” Langdon says. “What that does is impacts our ending stocks. After the growing season is over, they estimate how much cotton is in the environment.”

He says higher cotton consumption is what caused the sharp increase in cotton prices in 2011 when it was thought because the ending stocks were so low that the world could possibly run out of cotton.

After factoring in all this information, he says the Council projects what the price of cotton will be for the international market.

“In February 2016, the price was 66.5 cents a pound. At the end of March this year, it was almost 87 cents a pound,” Langdon says. “The New York futures, China, India, Pakistan, which are the major textile producing regions, there’s an upward trend.”

Then there are the prices for yarn by product type. Langdon says that for bedding, 20s, which is a common yarn size for sheeting products and even in patient gowns, is up 38% since January 2016. He says there are similar trends for blankets, knitted sheets and terry.

“What this does, we’ve actually had to take price increases for these product groups for shipping starting in April because the yarn prices have gone up so much,” he says.

Langdon says his company’s office in Pakistan tracks yarn prices on a weekly basis, and the word is that there’s not going to be much relief until the new crop starts this fall.

Next, Langdon discussed crude oil, since it provides a key component of polyester fibers. Price fluctuations impact raw materials for textile producers. He says that, in general, polyester staple fiber prices trend similarly to crude oil but not always.

“Back in July of last year, crude oil spiked, but polyester remained flat,” says Langdon. “Then, crude oil dropped in September, but polyester fiber actually went up. Then again, oil spiked in November/December and poly remained on a flatter trend. But in general, they do trend similarly.”

Part of the reason for the spikes, he says, could be the capacity or supply and demand that affect one product versus the other. Langdon says synthetic fiber prices from March ’15 to March ’17 went from price decreases to price increases. The highest consumer for synthetic fiber is Asia, and prices in that part of the world increased the most.

“There are a lot of price pressures in the marketplace right now for synthetic fiber,” he says.

Shipping is a key factor in the textile supply chain, and Langdon went over five shipping trends affecting the market this year. First is increased consolidation.

The second trend is U.S.-China trade relations. Langdon says these are the two largest trading nations in the world, and they’re going to impact global logistics more than anything.

“It’s really going to depend on whether the Trump administration stays with its protectionism threats, or we’re able to maintain free trade and focus on growth,” he says. “Everyone in the shipping industry is watching this very closely.”

The third factor that will affect shipping is labor unions. With the losses that were sustained in 2016, the labor unions in shipping are concerned about protecting their workers, Langdon says. Two of the biggest unions are the International Longshoremen and Warehouse Union on the West Coast and the PMA on the East Coast, which is contracted to 2019. He says these unions would like to renegotiate this year.

“I’m sure some of you remember the headaches we had back in 2014-15 when we had the longshoremen worker slowdown on the West Coast,” says Langdon. “It was never officially called a strike, but it was started when they closed the ports for Labor Day and didn’t pay the longshoremen for it, so when they did go back to work, they slowed down and it really created a backlog of container ships that took months and months to clear. We are very concerned about that.”

The fourth trend Langdon discussed is uncertain pricing. From 2008 to 2016, capacity has outpaced growth by 5% in shipping, he says.

“What that means is we built more ships to haul more containers than we actually had the demand for the containers,” says Langdon. “What that does is when you have overcapacity, it causes prices to drop, and that’s what’s contributed to the losses in this sector last year.”

The last trend Langdon covered is a new one—increased alliances. He says there have been discussions about vessel-sharing agreements where one company would use another company’s trade routes and vessels.

“This would impact how and where ships picked up cargo and the days on the water,” Langdon says. “A survey was done, and about 50% of the supply chain surveyed anticipated this would create disruptions in the supply chain.”

Check back Tuesday for part two, which will cover environmental and social responsibility factors.