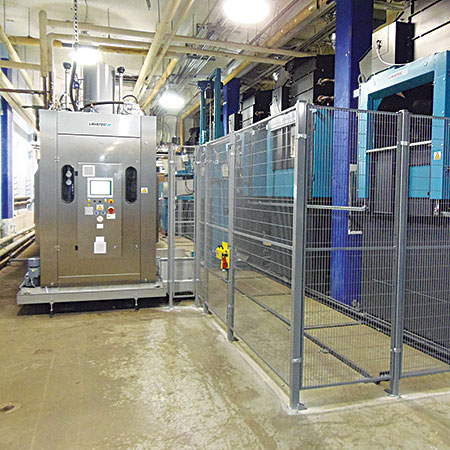 CHICAGO — Success in the laundry room for Judy McCollough, director of environmental services for Ramsey Village, a continuing care retirement community in Des Moines, Iowa, means keeping pace with all of the soiled underpads, diapers, sheets, blankets, comforters, table linens, towels and personal items that come through on any given day.

That’s a lot of textiles, which means a lot of wear and tear on the equipment.

Recently, the laundry retired an 18-year-old, 75-pound hard-mount washer. Ramsey Village made an investment in smaller soft-mount replacements, rather than hard-mounts, for significant gains in extract speeds, dry times, efficiency and overall productivity.

Every laundry operation reaches a point where it has to make the investment in new equipment and technology. Most, if not all, manufacturers today highlight the efficiency and savings their equipment will provide.

American Laundry News spoke with four laundries to find out how investing in new equipment and technology translated into better efficiency in relation to water, energy and overall production. In Part 1, Ramsey Village and Jackson Services Inc. were featured. This installment focuses on Eastern Health in Newfoundland and Best Western Plus JFK Inn & Suites in Houston.

Eastern Health, one of three regional Newfoundland health authorities, encompasses numerous locations throughout the area, many of which are small clinics and doctors’ offices.

The St. John’s laundry services 13 hospitals and long-term care facilities, the furthest being 110 miles away. About 85 employees process goods from 7 a.m. to 8:30 p.m., Sunday through Friday, with a swing shift taking over from the morning crew at 4 p.m.

The 25,000-square-foot plant processes nearly 7 million pounds of linen annually. That rate has increased more than 1 million pounds a year since Greg Osborne took over as general manager of laundry and linen services for the facility.

On Nov. 11, 2015, a new Lavatec Laundry Technology tunnel washer system, complete with extraction press and five drying units, arrived at the central laundry for Eastern Health, according to Osborne. The new 15-chamber tunnel replaced a like-sized Lavatec unit that had logged more than 22 years of service for the regional health authority.

“The old Lavatec was still operating fine,” Osborne says. “But after two decades, it was reaching the point of needing a major overhaul. Replacement plans were underway when I became GM about two years ago.”

He says the 10-chamber Lavatec tunnel performed admirably throughout the transition, and the new 15-chamber tunnel picked up the pace without missing a beat.

“There are huge reliability advantages with a new system like this,” Osborne says.

More immediately noticeable for Osborne were the advanced tunnel software and controls.

“We have lots of new software to work with,” he says. These include simple, intuitive compartment-to-compartment monitoring.

Reduced water usage is a plus with the new unit, but not a major issue here, according to Osborne. “We don’t use meters like most operations in other areas. Water here is plentiful and, by comparison, relatively inexpensive.”

Savings and productivity advances elsewhere, however, are quickly proving to be significant. Like Eastern Health’s original tunnel washer, six previous dryers (three Lavatec and three Passat) had logged many years—some dating back to 1985.

“We were drying single loads,” says Osborne. “And a load would take about 25 minutes.”

The new system includes just five steam-heated dryers, which more than match the throughput of their predecessors.

“The new dryers handle double loads in as little as 17 minutes,” he says. This equates to nearly three times the total daily output per dryer, a ratio of more than 2.9 to 1 versus the older machines.

Granted, the new 40-bar LP 572 extraction press squeezes out more water than Eastern Health’s previous unit, before linen cakes go into the dryers. The biggest productivity difference, however, stems from the dryers themselves, Osborne says. Equipped with multiple-phase temperature controls and infrared sensors, they can precisely read each load’s progress and deliver the goods as desired.

He also points out that no workers were displaced by going from six to five dryers. It has enabled the plant to effectively use more staff where needed.

Best Western Plus JFK Inn & Suites in Houston is a 100-room hotel that was purchased with its original laundry equipment. For Sanjay Patel, general manager, looking at the utility bills showed that the old equipment used energy at too high a rate.

“We were looking to replace the old equipment, specifically so we could save on utilities—energy,” says Patel.

He says that laundry usage is important for the hotel because it does all of its laundry in-house.

“On average, we reach 50-70% full occupancy, so laundry is a huge part of our business,” Patel says.

How much laundry does the hotel produce? According to Patel, each room has at least triple sheeting, pillowcases, two bath towels, two hand towels, one bath mat, shower curtain and more, which are all washed on a daily basis.

So, when it came to selecting new equipment, Patel looked hard at energy usage. He is a customer of Best Wash Inc., a dealer in Texas, and trusted the distributor’s input.

“James West from Maytag dealer Best Wash Inc., and his crew, are the best in the business,” he says. “We use them for all of our projects.”

For both washers and dryers, Best Western JFK chose Maytag equipment. There were several factors that led to this choice, such as the machines’ features, energy savings, little to no maintenance required, and experience with the brand, according to Patel.

And he says that he’s seen improvement in the laundry all around with the new equipment.

“With our new Maytag Commercial Laundry equipment, we’ve experienced time and energy savings, and our laundry comes out cleaner than before,” he says.

According to Patel, the hotel’s water and electric bills have decreased tremendously since the new equipment was installed. He estimates that the energy savings have averaged around 40-60%. In addition, the laundry loads from the washer are rinsed better, Patel says, which leads to faster dry times and the opportunity to complete more cycles.

“Most importantly, the machines work well so we don’t have to wait on parts or repairs, which we often experienced with our previous machines.”

For each of these laundry operations, investment in new equipment and technology has paid off. Working with distributors and manufacturers, the laundries have seen increased savings and productivity—which will pay off in the long run.