PULLMAN, Wash. — The Washington State University Cougars have had a good football season—good enough to earn a berth in the Hyundai Sun Bowl opposite Miami later this month.

But there are some losses staining the team’s 8-4 record.

However, that’s not the case with its uniforms. Tune in at the beginning of a WSU game, and the uniforms are bright and stain-free.

That’s due to an updated laundry facility in the university’s new football complex—and the pride and passion of Director of Equipment Operations Milton Neal.

“I’ve been doing laundry, this is my 31st year, so I’ve got a little bit of experience with athletic laundry,” says Neal. “Laundry is the one thing that I’m always trying to learn new things. Anytime I can find a little trick, I’m all ears. It’s just constantly trying to look for any new trick that might get a stain out.

“A lot of people don’t have a clue about football laundry.”

Most people don’t watch a football game and wonder how the team gets the uniforms so clean, he says.

“It takes a little pride, a little time and a little know-how to get them bad boys white again,” says Neal.

His pride, time and know-how were key to the new laundry facilities being designed and built just right at the new football complex.

He says the new laundry room was “born out of the things that our other equipment room didn’t have, things we learned over a 15-year period.”

Neal says that redesign was a great learning experience because he was an assistant at the time. Before the redesign was complete, he became head of equipment, which includes the laundry.

“I made a lot of mistakes,” he says. “We didn’t have a lot of say in the design of that room, but basically we took this new room and how we designed it, the things that drove us nuts in the other place, we addressed here.”

Neal says that when Bohler Gym was redesigned, the equipment staff knew immediately that there weren’t enough washers and dryers put in.

“We were doing all 17 sports and we only had 300 pounds of capacity. In our new room, that’s football-only, we have 465 pounds of capacity,” he says. “We learned our lesson, basically, is what I’m getting at.”

Neal learned his lesson, but getting the increased capacity for just the football program was a challenge.

“I had to fight a little bit because the people here on campus were like, ‘Well, Milton, you had 300 pounds capacity for 17 sports. Why do you need 465 for one sport?’” he says. “I invited those folks to come do laundry with me in the evening, which they didn’t take me up on. Basically, what I told them was when we redesigned Bohler Gym, we didn’t have enough capacity. So, what our goal was in the new room, that was football-only, was to put enough capacity in there that we could turn around football practice laundry, because that’s what we do the most of.”

For the equipment, Neal knew he wanted UniMac. In the Bohler Gym laundry, which today handles laundry of the other 16 sports at the university, UniMac machines were used. Where the old machines have to be manually programmed, Neal quickly became enamored with the new UniLinc feature, which allows program changes via computer.

“Being in here 16 months, we’ve got it pretty well finely tuned to where we want them,” he says. “When it came time for us to design this new room, I’ll be honest with you, I didn’t even know UniLinc was a feature. It was kind of a pleasant surprise.”

The feature also helped with the move-in, according to Neal, because he was able to transfer preferred cycles from the old units to the new ones. Then it was a simple matter of fine-tuning.

Neal worked with Washington Automated, a local distributor, to select the machines for the new laundry room. For washer-extractors, he says they have four 100-pound units and a 60-pound unit, plus five tumble dryers.

“Seven days a week and all year. Them bad boys, they get a workout,” Neal says. “We use them every day.”

Neal says they do football laundry twice a day on a regular basis. During the summer months, the team runs in the morning and then lifts weights in the afternoon. The players put their gear on a “Laundry Loop” that is numbered for each player, and then they drop the loop through a chute into a bin. Neal says he moves the bin 10 feet and then washes and dries the gear.

From that point, the gear is placed into a mailbox system. In a small hallway on the other side of the laundry, the players retrieve their gear, Neal says. Each player has a code to get his own, clean laundry.

Things get a lot heavier and more intensive during the season, he says.

“Daily laundry, like today, they’re just wearing T-shirts, shorts, sock, girdle, up in the weight room lifting,” says Neal. “The loop from practice is way bigger because it has a practice jersey on it and practice pants. When it turns cold, there will be sweats on there. So the actual practice laundry from when they go out to practice, it’s way bigger than when they’re just lifting or running.”

“When we do game laundry, it takes a while,” he says. “What will change that is if we play on artificial turf or on natural grass. That’s a long night when you play on natural grass because you’re scrubbing stains. When it comes to natural grass stains with our new equipment, we program in a soak cycle.”

The Cougars’ home turf is artificial, but several away-game opponents have natural grass fields. And those away uniforms don’t get washed at the opponent’s facility; WSU flies the dirty jerseys and pants back on the plane with the team, Neal says.

“We bring the uniforms back with us on the airplane because we don’t want them sitting in the back of a truck with stains setting in,” he says.

Neal says he sorts out the uniforms with the worst stains. He sets those to soak for four hours, and then he goes home to sleep for four hours before heading back to the laundry to pull out each jersey and each pant to make sure the grass stains are gone.

“You’ve got to take a little pride in it, to take your time,” he says. “The easy thing to do would be to pull them out after a soak, because you’re tired, just grab them out of that washer, cross your fingers and throw them into the dryer, but that’s where your pride comes in a little bit. Man, that’s on me if we play this next game and there’s grass stains still on the jerseys. That don’t look too good on me or the university.”

That may sound like a lot of work, and it is, but it’s much easier than before, according to Neal. He says that he and his assistant can actually get home to see their families during the football season.

“One of the nice things about the new laundry room is that we designed it so we’re not up here doing laundry all hours of the night, and that’s been a game-changer for us,” Neal says. “The new machines, the technology in 15 years, it’s night-and-day difference. They’ve made our life good is the bottom line.” 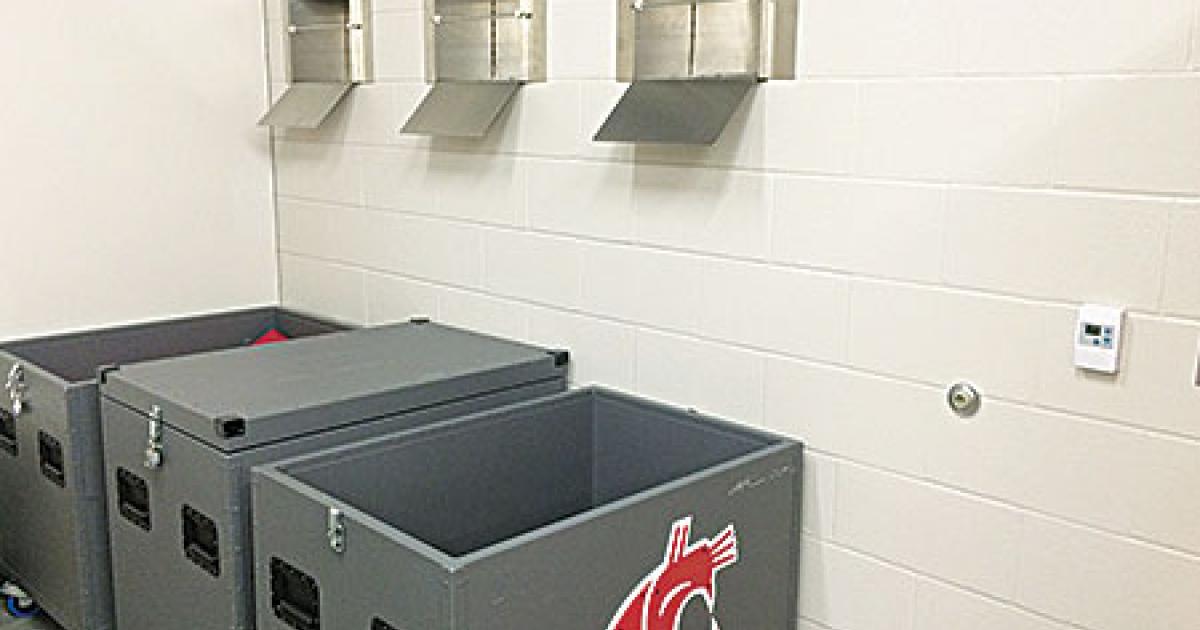 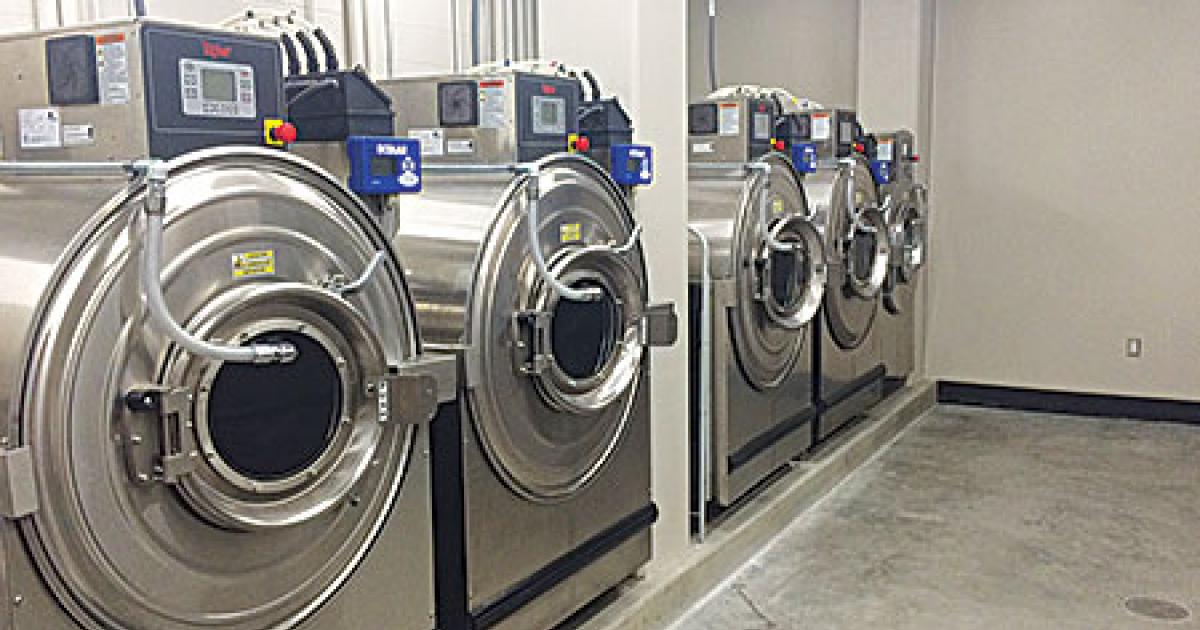 Washington State’s washer-extractors are only 10 feet away from the chutes where the soiled laundry is deposited. 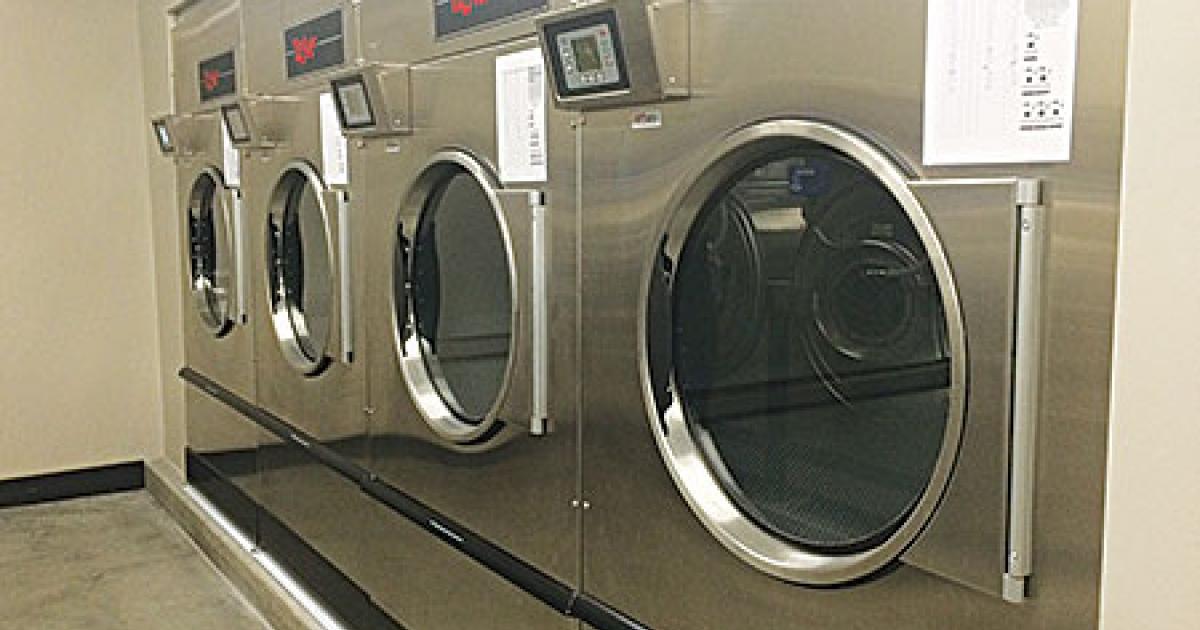 With the new washer-extractors and these dryers, WSU equipment staff can turn around daily football laundry in just over an hour.