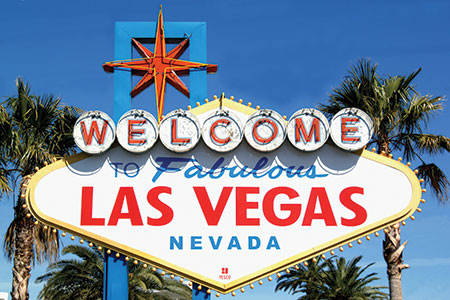 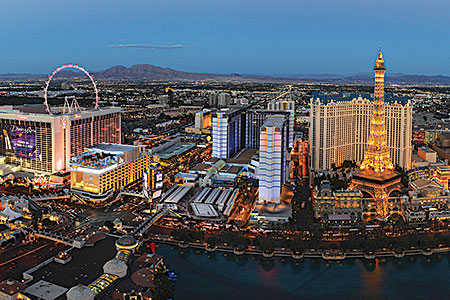 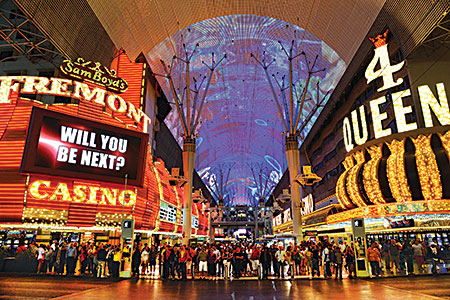 The ins and outs of getting around, experiencing Clean ’17 host city in June

LAS VEGAS — It’s been six years since the World Educational Congress for Laundering and Drycleaning, the Clean Show, has taken place here.

The Monday-Thursday show will take place at the Las Vegas Convention Center, but this being Vegas, attendees will want to make the most of their time off the trade show floor.

From classic Vegas attractions to new entertainment options, attendees will be sure to have the trade show experience of a lifetime.

First off, attendees need to get from McCarran International Airport to their hotels. Riddle says they can catch a taxi or a transportation shuttle. In addition, LASxpress is an airport shuttle service that can guarantee easy and fast transfer to and from their hotels and the airport.

Once on the Strip or downtown, Clean Show attendees who have been to the show in Vegas before know that it isn’t as short and easy as it seems to walk the area.

On show days, Riddle says the Clean Show will provide a complimentary shuttle between most official hotels and the convention center. The shuttle will run approximately every 15 to 20 minutes. On opening day, the shuttle will start at 7 a.m. (7:30 a.m. on other show days) and runs to 11:30 a.m. In the afternoon, it will run from 3 p.m. to 6:30 p.m. Monday and Wednesday, to 6 p.m. on Tuesday, and 1 p.m. to 4 p.m. on Thursday.

After the show is done for the day, it makes sense to take advantage of the city’s transportation options to save time and wear-and-tear on the feet.

According to the LVCVA, taxis are the main form of transportation used throughout Las Vegas. There is an abundance of them all over the city and, most likely, a few waiting within a taxi line at a hotel during all hours of the day and night.

One item of importance to note: Visitors aren’t allowed to hail a taxi from the street. There are certain areas for taxi pickups at hotels. Just look for the taxi line sign, usually near valet.

Uber and Lyft are also a way to get around the city. For those unfamiliar with these options, they’re ride-sharing services where drivers will pick up riders in their personal car and transport them to their destinations.

The LVCVA recommends using ride sharing off the Strip, not while at a hotel property or looking to get to the Strip. Also, it recommends being aware of when “surge pricing” is in effect. A rider could end up paying $100 for a trip that could have cost $30 to $50.

Another option for getting around the Strip is the Monorail. It stops at seven locations along the Strip: MGM Grand, Bally’s/Paris, Flamingo/Caesars Palace, Harrah’s/The LINQ, the Las Vegas Convention Center, Westgate and SLS Las Vegas.

The LVCVA says the Monorail is a good option for attendees of Clean at the Las Vegas Convention Center. The Monorail also offers free shuttle rides to various off-the-Strip hotels. It has options for single rides, a day pass and passes ranging from two to seven days. However, the Monorail does not run all night.

The Deuce is the name of Las Vegas’ public transportation that’s operated by the Regional Transportation Committee, according to the LVCVA. The bus runs throughout town, and there are two routes to take specifically for the Strip and Downtown. These are Deuce on the Strip, which will stop at about every property on the Strip, and SDX Strip & Downtown Express, which stops at about half the stops as the other route.

Once the day is done on the floor, Clean Show attendees will most likely want to grab a bite to eat. Of course, Vegas has something for every taste—and every budget.

The LVCVA says that new restaurants open just about every month. Eateries that have recently opened include Eggslut at The Cosmopolitan of Las Vegas, which includes comfort food and innovative eats. These range from the Bacon, Egg & Cheese Sandwich to the Gaucho Sandwich, which includes seared Wagyu tri-tip steak, chimichurri, red onions and seasoned arugula topped with an over-medium egg in a warm brioche bun.

Of course, being Vegas, buffets are big for dining. The LVCVA says The Buffet at Wynn Las Vegas debuted a new concept, elevating the traditional buffet with additional unique dishes, a more intimate atmosphere and state-of-the-art technology in both the kitchen and dining room.

Riddle says that each Clean ’17 official hotel boasts its own restaurants and food courts. Most hotels have at least one exceptional dining facility on site.

Attendees won’t be lacking for something to do once the trade show floor closes. Las Vegas is known as the “Entertainment Capital of the World,” so there are many concerts and shows to enjoy.

The LVCVA says that one of the newest shows on the Strip is BAZ - Star Crossed Love at the Palazzo Theatre. This new-generation cabaret is a high-energy movie-music mash-up of the world’s most iconic love stories, as imagined by famed film visionary, Baz Luhrmann.

Riddle says attendees have many concerts and shows to look forward to while attending Clean. Jennifer Lopez will be at Planet Hollywood June 7–10. David Copperfield is at MGM June 4–10. Terry Fator, winner of America’s Got Talent, does his celebrity singing impersonations and unparalleled ventriloquism at the Mirage nightly Monday through Thursday.

For spectacular productions, Cirque du Soleil offers seven shows around town, all of which are well worth seeing, according to Riddle. The Blue Man Group has one of the best-selling shows in Las Vegas, running Monday through Sunday at the Luxor.

Or, maybe after a day on the trade show floor, attendees will be looking for a laugh. The LVCVA says there are many comedians and venues for chuckles and belly laughs.

Carrot Top, part prop comic with his 35 trunks chock-full of his latest ingenious inventions and part ringmaster of a spectacle of lights, lasers, pyrotechnics, loud music and outstanding humor, takes audiences on a wild 90-minute ride during his show at Luxor Hotel & Casino, according to the LVCVA. Comedy-magician Mac King has brought The Mac King Comedy Magic Show to the Las Vegas Strip for a historic 17-year run at Harrah’s Las Vegas.

Comedy clubs include Brad Garrett’s Comedy Club at the MGM Grand Hotel & Casino, the Laugh Factory at the Tropicana Las Vegas and Aces of Comedy at the Mirage Hotel & Casino.

If Clean Show attendees want to be a bit more active in the evening, or if they have some free time during the day, Vegas boasts fun activities and interesting museums.

Downtown’s famous casino-lined Fremont Street has been converted into a 175,700-square-foot pedestrian area covered by the Viva Vision canopy, the world’s largest graphic display system, says the LVCVA. Called the Fremont Street Experience, this canopy showcases spectacular light and sound shows every hour, on the hour, during the evenings.

Clean Show attendees looking for thrills of a different nature can ride SlotZilla, the world’s most unique zipline attraction, according to the LVCVA, featuring the 850-foot zipline and the 1,750-foot Zoomline, as people launch from a 12-story slot-machine-themed takeoff platform to fly under the Viva Vision canopy.

For more rides, the Stratosphere Casino, Hotel & Tower has four of the world’s highest rides, located 100 stories above the ground, according to the LVCVA. SkyJump is a “controlled free-fall” in which participants plummet 855 feet at a speed of up to 40 miles per hour. X-Scream teeters riders over the edge of the tower 900 feet above the ground, 30 feet over the edge of the building, at 33 miles per hour.

Big Shot is a thrill ride that shoots adrenaline-seekers 160 feet into the air at 4Gs before letting them free fall back to the launching pad. Insanity is an appropriately named, dizzying, spinning ride that dangles passengers over the edge of the tower before whirling them around at speeds approaching 40 miles per hour.

For a less heart-pounding ride, the LVCVA recommends the High Roller, the tallest observation wheel in the world at an impressive 550 feet tall, at The LINQ Promenade. It towers above outdoor dining, entertainment and retail district by Caesars Entertainment and provides spectacular views of the Las Vegas Strip and Valley.

An alternative entertainment option to shows and concerts, rides and, of course, gaming, are the many museums available throughout the city, Riddle notes. Madame Tussauds Celebrity Wax Museum is located at the Venetian, where attendees can take photos, interact with favorite celebrities and enjoy a 4D short film experience.

Other museums the LVCVA notes include the Neon Museum and The Mob Museum. The Neon Museum exhibits iconic Las Vegas signs and is available through an hour-long guided tour. Tours are available seven days a week.

The National Museum of Organized Crime and Law Enforcement, better known as The Mob Museum, is dedicated to telling the thrilling story of the downfall of organized crime, led by law enforcement. True stories of the mob’s history are brought to life via engaging exhibits, high-tech theater presentations and more than 600 artifacts.

For no-cost entertainment, Riddle says that Clean Show attendees only need to take a stroll down The Strip. In addition to great people-watching, enjoy the volcano show at the entrance of the Mirage (7 p.m. and 8 p.m.), talking Roman statues and changing lighting at Caesars Forum, a beautiful water show at Bellagio (from 3 p.m. to midnight), a harbor rainstorm at the Miracle Mile Mall, and many more street concerts and performances.

It seems like most trade show attendees want to at least buy a little something when they’re in Vegas, and the city doesn’t disappoint with its shopping options.

According to the LVCVA, one of the most recent shopping options to open is the Grand Bazaar Shops outside of Bally’s Las Vegas. Modeled after the famed Grand Bazaar in Istanbul, this is a two-acre outdoor walking mall. Shoppers stroll under the brightly tiled roof as they visit more than 80 boutique retail spaces, including a Swarovski store where customers can haggle over crystals, as well as experience a nightly light show featuring a 4,000-pound crystal in front of the store.

Riddle notes that Las Vegas has several shopping centers to take attendees out of the heat. Many shopping venues are intricately built to replicate some of the best marketplaces in the world. Browse the stores of Paris, Rome, New York, Cairo, Venice and South Pacific all in one trip.

The Forum Shops at Caesars has more than 100 stores and 11 restaurants with an impressive collection of premium chic designer shops. Rue de las Paris, a collection of cobblestone streets and alleys, houses a promenade with numerous French shops and boutiques.

The Venetian has the Grand Canal Shops, reminiscent of the famous Grand Canal waterway in Venice, Italy. Browsers at the Miracle Mile Shops at Planet Hollywood will find 200-plus reasonably priced specialty stores and restaurants in the swanky Los Angeles-themed mall.

For just a simple mall experience, Fashion Show Mall houses 140 stores, including those usually found in a typical upscale mall.

Of course, there is much more to see and do in Las Vegas. These ideas are just the tip of the iceberg for Clean Show attendees to make the most of their time in the “City of Lights” and the “Entertainment Capital of the World.”