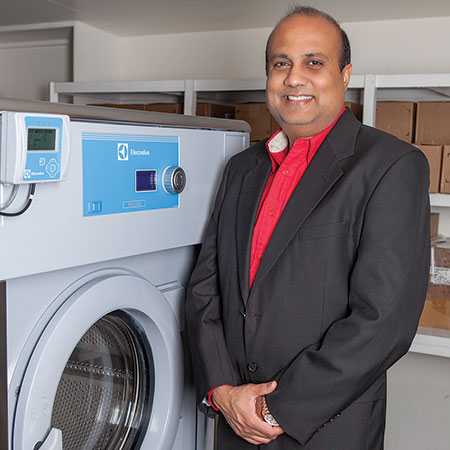 Showing others how eco-friendly lodging makes sense ... and cents

UKIAH, Calif. — In the hospitality business, many owners see only two worlds to spend money: the front of the house—amenities and features that attract and cater to guests—and that other land known as the back of the house. Most owners place these worlds in different galaxies.

Raakesh Patel is not most owners. His property strikes a true balance between the two worlds. Indeed, Patel sees things differently, and the primary color he is focused on is green. It’s his passion to show others how eco-friendly lodging makes both sense and cents.

“Green is not just a fad or a marketing theme,” Patel says, adding that he wants to make a difference, not just at his property, but in the world.

There are more than 7,600 properties under the Wyndham Hotels umbrella. In 2012, Patel’s Super 8 location here stood out from the group, garnering the prestigious Wyndham Green Award. The award is presented to owners whose properties have made a concerted effort to engage in practices that contribute to the betterment of the planet and offer guests a green environment.

Patel’s 54-room property brings features such as energy-efficient lighting, room systems managed by occupancy sensors, and a recycling program that cut his waste bills in half. He even installed charging stations for electric vehicles, a move he says raised a few eyebrows.

The property’s commitment is evidenced by certifications and ratings from California Green Lodging, the Green Business Bureau, Green Key Certifications and TripAdvisor’s Green Leader program. Super 8 also recognized Patel’s effort by presenting him with the Spirit of Super 8 award.

“It’s an amazing feeling … I feel so honored,” he says. But those awards weren’t the culmination of his work; they were just the beginning.

In that land known as the back of the house, the laundry neighborhood ranks as a necessary evil. Hoteliers often see it as a cost center, only drawing attention when equipment breaks down and loads are stalled.

“One of the most major expenses in a hotel is a laundry,” Patel says. So, naturally, where other owners see a drain on resources, Patel saw opportunity and one that he could make a major impact on with a green focus. “But it has to be done right,” he adds of making sure to perform research in advance of rolling new equipment and systems in.

At the time, his dated hard-mount equipment was giving him headaches. An expensive bearing replacement and having to re-pour the unit’s concrete pad had him wondering about a better solution.

A conversation with his distributor Viking Service about new Electrolux washers and a PLUS system that eliminated large upfront capital expenditures got him thinking.

“I was wondering, how much more can I really save with new equipment,” he says of his skepticism of bringing in new Electrolux Professional washers, and just how utilizing the PLUS pay-per-use system would make good fiscal sense.

Then he started running the numbers on his costs for six to seven loads a day (more in the summer) and he was intrigued. With PLUS—Professional Laundry Utility Service—Patel simply uses the equipment as needed and pays only for that usage; there is no linen rental or laundry contract. PLUS laundering becomes a utility service, just like water, gas and electricity. Like any utility, one pays for PLUS only when it’s used, with no long-term obligation.

With all parts and service included and backed by a lifetime warranty, he was sold. That’s capital that could be better allocated in other areas of the business.

In addition, PLUS systems provide Electrolux Professional laundry equipment that is designed for exceptional results, increased productivity, and low water and energy usage.

Check back next Tuesday (May 12) for Part 2 about the results of using the equipment!