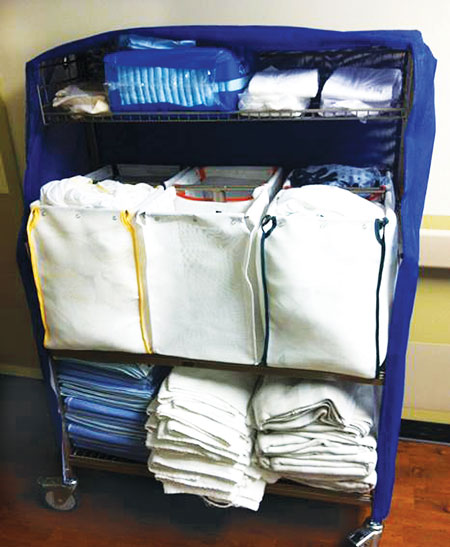 MCDONOUGH, Ga. — Cutting-edge products introducing new breakthroughs in medical technology are launched every day in the U.S. healthcare market. Press releases announcing these new products are published in medical journals and generate attention and excitement in the hospital executive suite.

Many years ago, the responsibility for distribution of hospital linen was the exclusive domain of the on-premises laundry (OPL). The OPL manager often supervised the entire process, from washing to delivery to picking up soiled. However, with the gradual closure of many hospital OPLs, responsibility for linen management was assumed by department heads who had little training or experience with it.

Materials management, dietary services and environmental services (EVS) were the primary departments to take over responsibility for hospital linen, and many facilities chose to become rental customers and leave management of linen replacement and inventory to a co-operative or commercial laundry. Responsibility for getting clean linen to the end-user, however, has generally remained in the hands of the hospital.

A recent study of users of Encompass Group’s ExecutorNET® linen management software program revealed that the average number of distribution locations in a hospital per 100 beds is 25. A 200-bed hospital would generally have 50 separate stocking locations; a 300-bed hospital around 75; and a 400-bed hospital could have close to 100.

Thirty-five percent of these stocking locations (about nine per 100 beds) are designated as inpatient departments, which are generally, along with the emergency department, the major linen users in the hospital where linen is stocked on carts in large volumes. The balance of the linen stocking locations are designated as outpatient, surgical, or miscellaneous (a catch-all category for locations like dietary, doctor sleep rooms, etc.), and are primarily areas where linen is stocked in smaller quantities in cabinets, drawers or small shelving units.

One of the latest developments in hospital linen product and distribution technology is the no-fold system.

Pillowcases and flat and fitted sheets of wrinkle-resistant knit construction are delivered to the hospital bagged in bulk, and may be stored on user area carts, unfolded in bins. Items that still require folding, such as spread blankets and underpads, are stored, as usual, on shelves.

The knit construction of the bed linen provides improved patient comfort and patient room aesthetics, while also driving efficiencies in bed making, product life, processing and distribution. The result is improved patient and staff satisfaction and a decrease in overall linen supply costs.

The no-fold method is available with specially developed distribution carts or may also be adapted to many hospital carts already in use.

The 1990s saw the advent of automation in linen distribution systems, beginning with scrub dispensing machines, originally developed for uniforms in the hospitality industry. The scrub dispensers replaced the manned one-for-one scrub exchange booths and could often result in a decrease in headcount.

Scrub dispensers initially proved extremely popular in teaching hospitals, where there was high turnover of students and residents resulting in high loss of scrub apparel. Their popularity has expanded to other acute care hospitals that desire more control over scrub apparel by limiting the free access of hospital staff to scrub stock.

This technology has also gained support from industry organizations such as the Association of periOperative Registered Nurses (AORN).

The 2012 edition of AORN’s Perioperative Standards and Recommended Practices for Surgical Attire recommends increased control of distribution and storage of surgical attire and discourages home laundering, since it may not meet the specified measures necessary to achieve a reduction in antimicrobial levels in soiled scrubs.

The newest development in linen distribution automation is the flat-good linen dispensing machine, originally developed for use in the ER where linen was commonly lost to emergency medical service (EMS) personnel. Automation has since been expanded to inpatient and outpatient departments as a means to control linen usage and waste by limiting staff access.

Both the scrub and flat-good dispensers have the advantage of requiring less inventory than a freely accessed exchange or replenishment cart, are easy to stock, easy to use and can accommodate both traditional flat goods and no-fold knit linen, while tracking linen usage and producing utilization reports. The automated doors ensure linen is kept covered, an important linen-related focus area of Joint Commission inspections.

If necessity is truly the mother of invention, then the advent of these new approaches to linen distribution is a direct result of industry conditions that now dictate increased efficiency and control of this valuable healthcare asset.