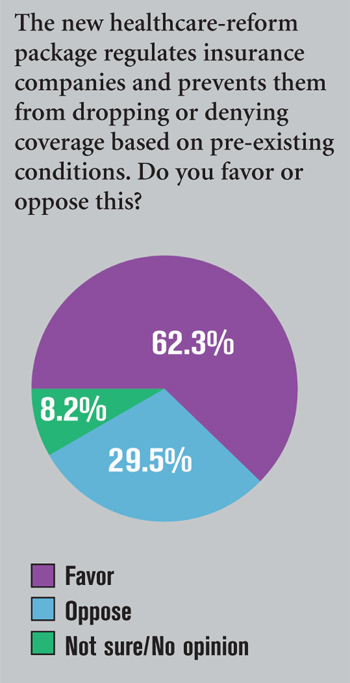 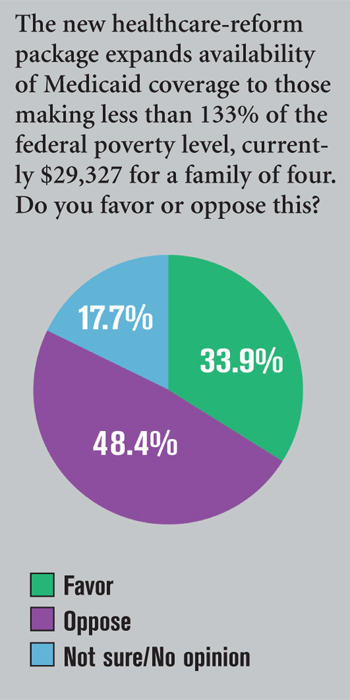 CHICAGO – Respondents are split on various aspects of federal healthcare reform, but more than three-quarters of them (76.2%) oppose the recently passed package as a whole, according to American Laundry News’ May Wire survey.PRE-EXISTING CONDITIONS
Roughly 62% favor regulating insurance companies and preventing them from dropping or denying coverage based on pre-existing conditions. Nearly 30% oppose this provision, and 8.2% are not sure or have no opinion.INSURANCE EXCHANGES
Another aspect of the package establishes insurance exchanges in each of the 50 states where individuals and small businesses are able to shop for an affordable plan. Nearly 70% of respondents favor this, 25.8% oppose it, and 4.8% are not sure or have no opinion.MEDICAID COVERAGE
Roughly 48% oppose expanding the availability of Medicaid coverage to those making less than 133% of the federal poverty level, currently $29,327 for a family of four. Nearly 34% favor this provision, and 17.7% are not sure or have no opinion.ENTIRE PACKAGE
When considering the reform package as a whole, 76.2% oppose it, 14.3% favor it, and 9.5% are unsure or have no opinion. Cost to taxpayers was an overriding theme in the individual comments that were received, and several respondents expressed concern that the reform reflects a governmental shift to socialism.
Here is a sampling of respondents’ comments:
• “Overall, the healthcare-reform package will raise government spending in an era where spending should be cut back.”
• “The bill expands coverage for many uninsured, and the insurance reforms that no longer allow denying coverage for pre-existing conditions or for when you are sick are a huge plus. However, it’s mostly being paid for by new taxes which will hurt America’s competitiveness and our overall economy.”
• “You turned the IRS loose on us in a further invasion of our privacy. I will vote Republican from now on because of this.”
• “Stop giving away hard-earned tax dollars to illegals. Fix the corruption in the insurance industry first.”
• “While most people would have to say they are for all of these [provisions], they could have easily been enacted without the socialization of the entire system.”
• “What healthcare reform? It seems like no one has clarified what the plan is exactly, or who is going to pay for what and for whom, nor does anyone seem to be asking specific questions regarding who qualifies and when, who pays when an employee leaves your employment, who is determining what kind of coverage is required, etc.”
• “We really needed to do something. I work in an industrial laundry facility and have all my adult life. I make almost $30,000 a year and have a wife who is unable to work right now. We currently do not have insurance on her, nor can we afford any due to the high cost. We can’t afford the extra $86-a-week premium when you take home, after taxes, $416 a week. I guess we could stop eating or move into a tent.”
• “Something had to be done. Even if this new plan isn’t ideal, it has broken the logjam over the past 20 years and it can be tweaked further once the reform is put into place.”
• “Remember, complete government control of our healthcare means the new system will run with the precision of the DMV [and] with the caring of the IRS.”
Subscribers to American Laundry News’ Wire e-mails—distributed twice weekly—are invited to participate anonymously in a brief industry survey each month. While it presents a snapshot of readers’ viewpoints at a particular moment, the survey should not be considered scientific.
The entire American Laundry News audience is encouraged to participate, as a greater number of responses will help to better define operator opinions and industry trends.
Click here and follow the menu instructions to sign up for the free e-mail service.